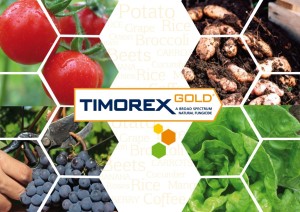 The benefits of biopesticides are that they achieve what traditional pesticides have sought to achieve while doing it with the least impact on the environment,” stated Guy Elitzur, The CEO of Stockton Group. They also offer growers the ability to market commodities in markets with stringent MRL regulations. “A standout among these products is Stockton Group’s Timorex Gold, which has shown great promise in both treating plant diseases and preventing them.”

“Timorex Gold is a natural plant extract-based fungicide with a broad spectrum activity and unique multiple modes of action,” explained Guy. “The product is an effective tool for production, is renewable and sustainable, offers an improved impact profile and reduces pesticide residues. It is not toxic to beneficial and non-target organisms and is beneficial to insects, including honey bees.” That makes it great for use on commodities headed to markets with strict residue standards, like the European Union. “But most importantly, it works well on some of the worst plant diseases out there.”

“Timorex Gold has demonstrated high efficacy against a broad spectrum of plant-pathogenic fungi with strong prophylactic and curative actions,” noted Guy. Part of the reason it’s so effective is that it targets fungal pathogens at the cellular level. The cell walls of the vital parts of those pathogens are weakened, so the ability for them to survive and infect the plant is severely limited.

“It acts against various stages of the fungal life cycle as a preventive and curative agent,” noted Guy, and in addition to being effective before and after a plant has shown signs of disease, it also works very well in combination with other fungicides.

“It perfectly fits the criteria of botanical biopesticides,” noted Guy, “and meets the challenges of sustainable agriculture.”