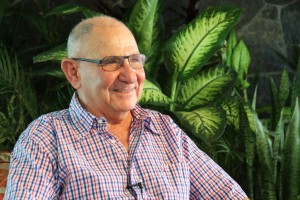 London – Peter Tirosh, founder of the Stockton Group, who passed away earlier this year, was honored with Agrow Lifetime Achievement Award, held by Agribusiness Intelligence – Informa at London’s Banking Hall.

Peter planted a seed in 1994 when he established Stockton STK, which has become a leader in the development and commercialization of botanical-based biopesticides. Today at the ceremony, Ziv Tirosh, Peter’s son, and Vice Chairman of Stockton, accepted the Agrow Lifetime Achievement Award on behalf of his late father. Peter was a distinguished individual who made a profound and enduring contribution to the crop protection industry. He was held in high esteem by the hundreds of industry professionals who had the privilege of working with him.

Peter Tirosh (1940-2016), founder of Stockton STK, was a pioneer in several areas of the crop protection industry. He began his career in 1970 when he took a crop protection counseling position in a UN FAO project in Central America. Thereafter, he spent the next 23 years working for Makhteshim Agan.

At Makhteshim, Peter was known as “Master of Brazil and South America” for building their presence in the region He worked successfully to make Makhteshim Agan into a substantial company in South America. He laid the groundwork for MAI’s distribution network all over LATAM, and for their later acquisitions in the region. Peter was involved in the formation of Defensa in the 1970’s and in the success of Herbitechnica, both located in Brazil, as well as their later acquisitions by MAI to form Milenia or Adama Brazil.

When Peter left Makhteshim Agan in 1994, he founded AGRIMOR, which later evolved into Stockton STK.  In the early years, Peter worked alone and developed a successful chemical pesticides Business. Later on, together with his son, Ziv, the business evolved into today’s Stockton STK, a company which specializes in the development, and commercialization of botanical-based biopesticides.

During his last ten years at Stockton, Peter devoted himself to improving productivity and exploring natural environmental resources in his pursuit of innovative products that would be eco-friendly, reduce chemical loads, be safe for the farmers and that would not harm the surrounding communities.

“They say, he who sows bountifully shall also reap bountifully,” stated Guy Elitzur, CEO of Stockton. “Peter was this kind of person. He was a true farmer at heart; a shepherd who had passion for the land and for the inheritance he would leave behind to humankind with modern agriculture technology.”